The hockey this August will be like no season before it, and hopefully, also like no season after it. There are 24 teams still in the hunt for the Stanley Cup in the middle of summer and with that comes the inability to predict and analyze these coming games the same way they would’ve been analyzed back in March. There has been a five month break, and any momentum teams may have had, or lack thereof, is completely irrelevant now, everyone has a shot. So I thought, instead of putting in the work to research and give an educated analysis on the games to come, why not play a few games of NHL 20 online with some Stanley Cup qualifier teams, and take those results as gospal.
The basic premise here is that I’ve painstakingly tried to match up qualifying series teams using NHL 20’s online competitive mode. This required a lot of match making attempts, and quitting on people before the puck dropped, if they weren’t playing as the team I was looking for. This is a practise which I’m sure did not make me many friends on the other side of the connection. However I didn’t want to just sim the games or play against just one person or the computer. I really feel like the randomness of NHL 20 online mixed with the randomness of this NHL playoffs is a nice fit. In the end It was a long process and some matchups came quicker than others. I was sadly only able to land games representing four of the eight qualifying series. With the results I got though, here Is what I’m presenting to you:

(side note, If anyone would like to help me complete a game representing a matchup I didn’t get, or any matchup in the rounds to come, shoot me a message and we’ll go toe to toe in Chel, it aint no thang.)

With the spirit of virtual sports and sims already in everyone’s head, I’m going to be taking the results of the games I’ve played and presenting them to you, as if they were real games. This includes analysis as if there was actually something of substance here to analyze. My competitive rating in NHL 20 usually sits around 700. It’s nothing to write home about, but it’s good enough to keep most every competitive game close scoring and resembling that of a real hockey game.
From here on out, If I feel the need to refer to myself or my opponent I will be using the term of coach and opposing team’s coach. With that said, lets keep it fun and here we go.

From the outside looking in, it might seem as though Edmonton can put it in cruise control and ease themselves through this qualifying round. That may be true in some realities, but in this one, Edmonton is going to have to work with as much intensity as they can bring.
The scoring was low in the first period of their contest with Chicago, which just proves that both teams are here to play and nothing is going to come easy for anyone. James Neal and Olli Määttä finally got the blood pumping with a fight in the second, and despite Määttä being handedly destroyed by Neal, the coach thought that Määttä’s initiative here was a driving force for things to come. The Blackhawks later opened the scoring with a shorty in the second and Honestly you just can’t have that if you’re Edmonton, come on now. Shortly after, Patrick Kane had a nasty clapper from the point and with the help of a huge screen in front, Mike Smith didn’t even know what way was up by the time that puck hit the back of the net. Moments later though, the Blackhawks gave a fat rebound away to McDavid, and he put the puck away with ease, you simply can’t do that if you’re the Blackhawks, the Chicago coach was visibly rattled.

With the game sitting at 4-4 it was looking like things would be headed into an extra frame, until Brandon Saad took a lazy tripping penalty to put Chicago on the defensive, late in the third. However what could’ve easily been a death sentence for Chicago turned into their road to victory, as they put away the second short handed goal of the game to take a 5-4 win.

Ultimately either team is just as capable of making the other pay for bad giveaways, but Chicago has to be extra careful with McDavid on the ice and Edmonton needs to be cautious that they don’t get too cocky. Thankfully though, Snoop Dogg didn’t show up to throw anyone off their game.

Much like the recent Oilers v Blackhawks game, the Flames and Jets remained scoreless after one period. Going into these qualifiers they sit at 8-9 in the standings respectfully, so it’s understandable how evenly matched the game felt initially.
The Jets got their first goal off of a juicy rebound and honestly, if you’re David Rittich you just gotta have better rebound control off of visible shots from the point. However this goal didn’t wake up the Flames, as shortly thereafter they let in another goal off of yet another manageable rebound. Needless to say the Flames coach was ready to throw sticks over the bench, but thankfully cooler heads prevailed, as the coach clearly channeled his inner Snoop Dogg to help him maintain his composure. Although the Flames stayed competitive in regards to time on attack and faceoff wins, the Jets clearly had them beat on time on attack. This really showed as they scored yet another goal on a great passing play, making the game 3-0.

It was clear that the flames really just didn’t show up to this game as they walked away with a 4-1 loss. Sources later claimed that allegedly every single player on the Flames roster had to go pee during most of the game. However rigid 30 second break times imposed by the league made it difficult for them to relieve themselves. This is definitely something that should’ve been addressed in the CBA/ Return to Play negotiations.

One might assume that some type of advantage may come with being one of two teams in the NHL still playing in their home arena. However the Leafs may very well have been playing in Nationwide Arena, because it was canon city for the Jackets in this contest. 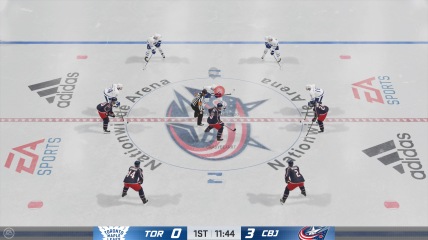 Early on, Seth Jones showed off his accuracy with a wrister from the point that easily found a home in the back of the net. Shortly after, the entire Jackets team dominated the front of the net to make the score 2-0. Still in the first Atkinsion put his team up by three, off of a great team effort, and a fourth goal would soon follow as a result of a bad giveaway by Toronto. After the fourth goal lit up the back of Frederik Andersen’s neck, the Leafs players and coaches all unanimously threw in the towel. They all picked up their stuff and left the building in a shocking loss of connection to any sense of sportsmanship. Rumour has it that Snoop Dogg was making his way up to the broadcast booth in time for the second period, so perhaps this first period walk out by the Leafs was for the best. 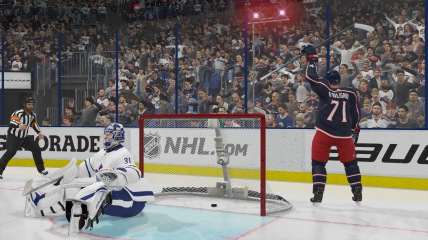 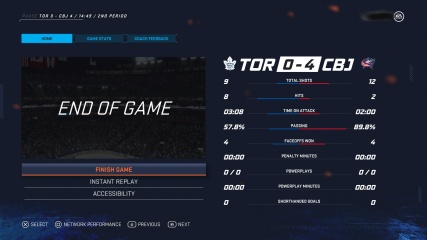 Oddly enough the Leafs were the only team that made their coach accessible for media availability after the game, this is what he had to say when asked to predict the outcome of their series: 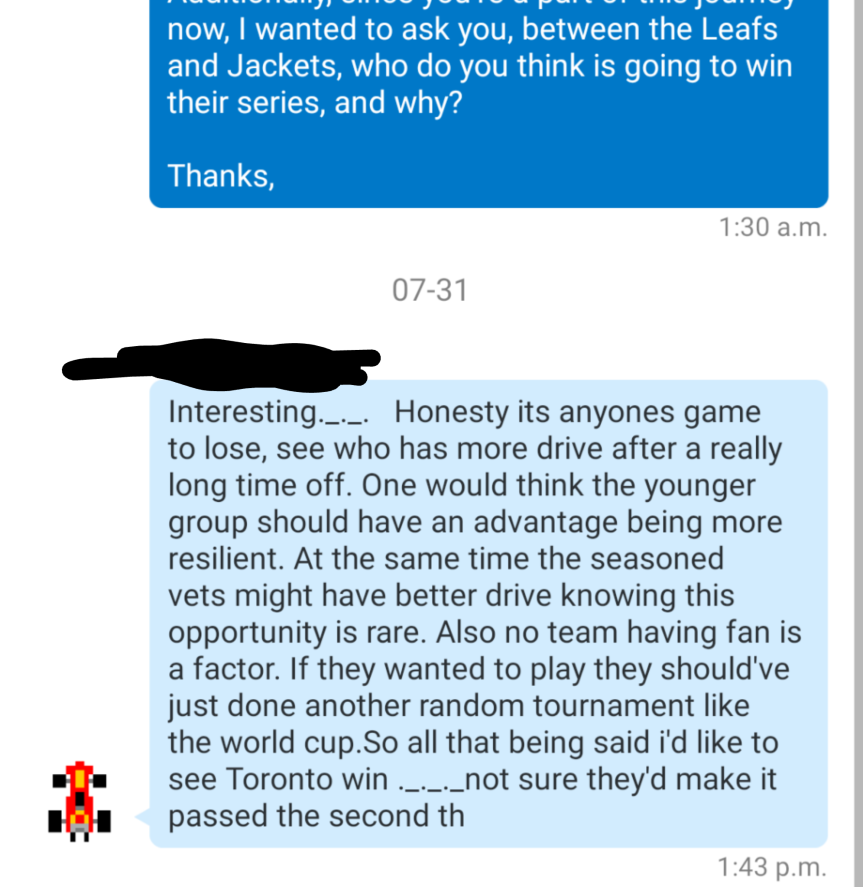 Much like Edmonton and Chicago, one would think that this series is mostly predetermined. However, this year continues to prove that nothing is for sure.
Kris Letang put the Penguins up by one early, and Montreal retaliated with a big hit on Marcus Pettersson forcing him to leave the game. Although it’s difficult to see a very real player get injured, this is the kind of intensity Montreal will need to bring to the series in order to have a chance. However the momentum still had not shifted as the Penguins were able to easily put away two more goals to make the score 3-0 after two periods of play. The Montreal coach complained that he was distracted by Snoop Dogg using the buildings PA system to announce that he is better than Wayne Gretzky. However nothing much could be done about that to ease his frustrations, maybe in 2021 if the league wakes up, but not now.

In the third period though the Canadians came out swinging scoring two goals just over one minute apart from each other. The Montreal comeback was completed late in the third after a turnover by the Penguins. The game would remain tied up and be headed into extra time.

What should’ve been a 5 on 5 overtime was for some reason 3 on 3 overtime, very strange, and even stranger, the contest continued into a shootout which seems odd in the playoffs. Nevertheless, after the results of two goals from each side during the shootout, it was Montreal who would end up completing their comeback with four straight goals and winning the game. This is nothing else proves that it ain’t over until it’s over.

The takeaway from all this

The main takeaway here is that nothing I’ve said in this entire article, matters in the slightest. However, looking beyond that, I think that the unique situation of the even footing of all the teams, and the high intensity of the Stanley Cup Playoffs, should give us some extremely unpredictable and entertaining Hockey in the months to come.